The Anaheim Ducks started a cross promotion a year ago on February 5, 2016 with an Angels night at Honda Center. Current and former Angels attended the game and participated in the ceremonial puck drop, the Ducks wore Angels jerseys for the pre-game skate, and the evening was Angels themed. They had merchandise available in the team store with a combination Angels-Ducks logo and they sold autographed mystery pucks with an Angels-Ducks logo. I was lucky enough to get Corey Perry and Jakob Silfverberg. 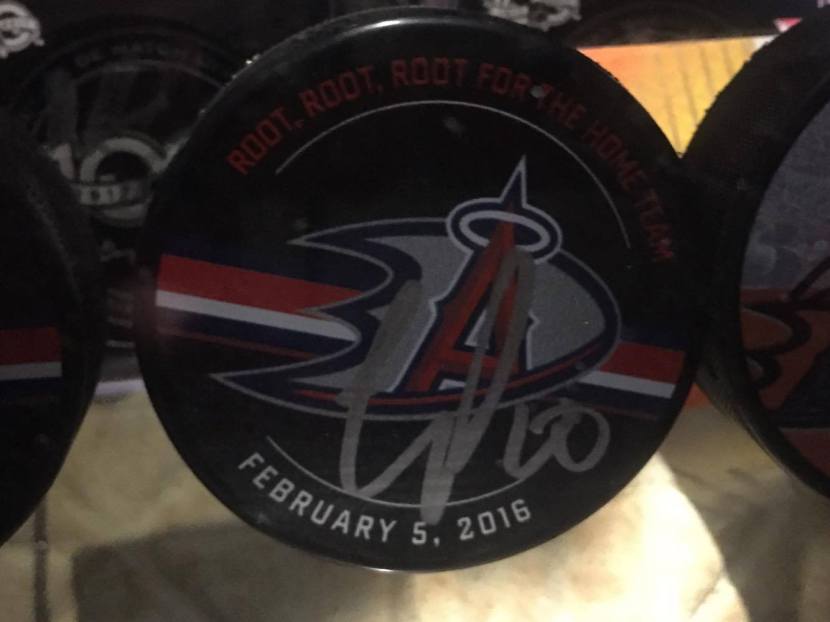 The Angels then hosted Ducks Night at Angel Stadium on August 16, 2016. The team wore special co-branded jerseys and caps during batting practice. I was fortunate enough to attend batting practice on the field that day. I had won a meet and greet with Jered Weaver because I found a gold ball in the Angels Mystery bag fundraiser. 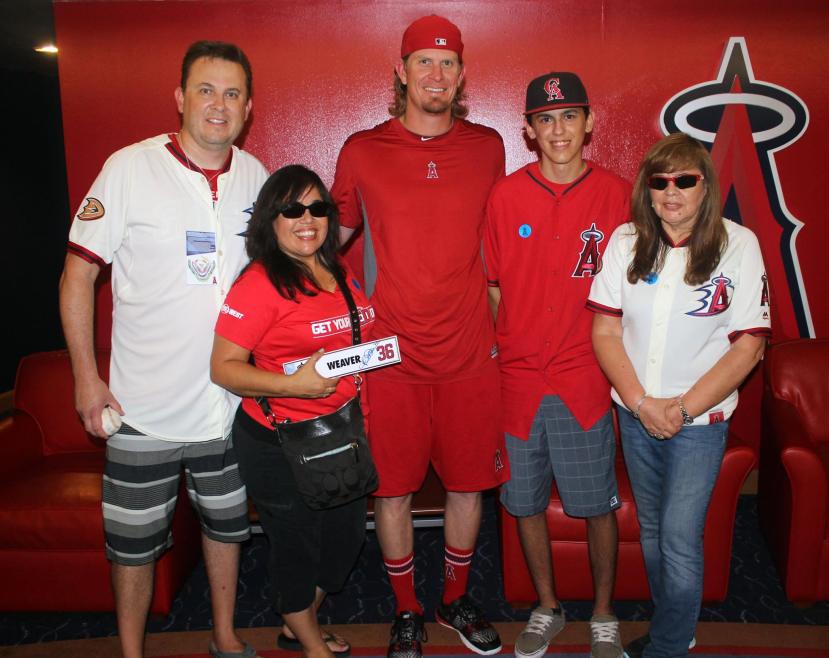 My son, wife, Mom, and I on the field for BP at Ducks Night at Angel Stadium. 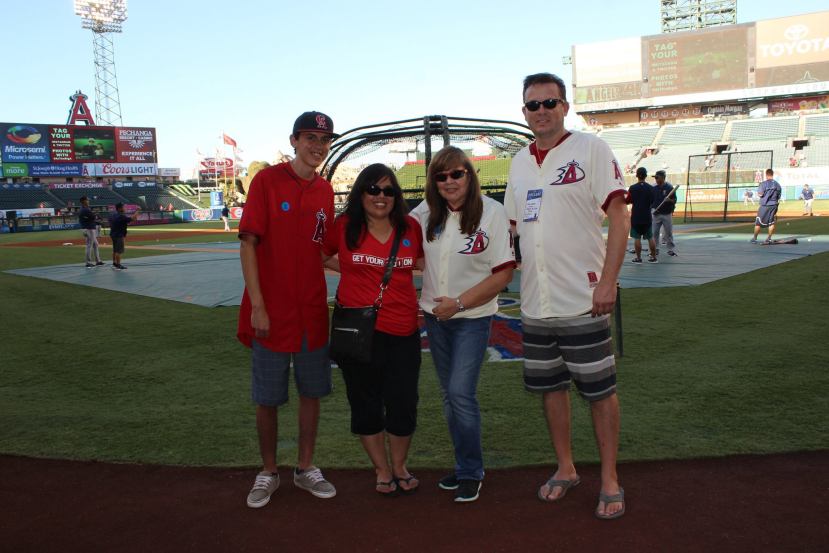 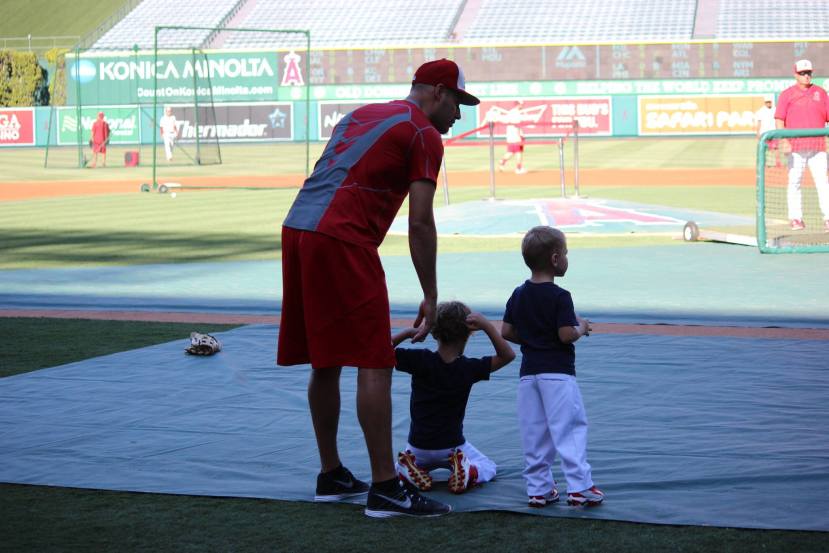 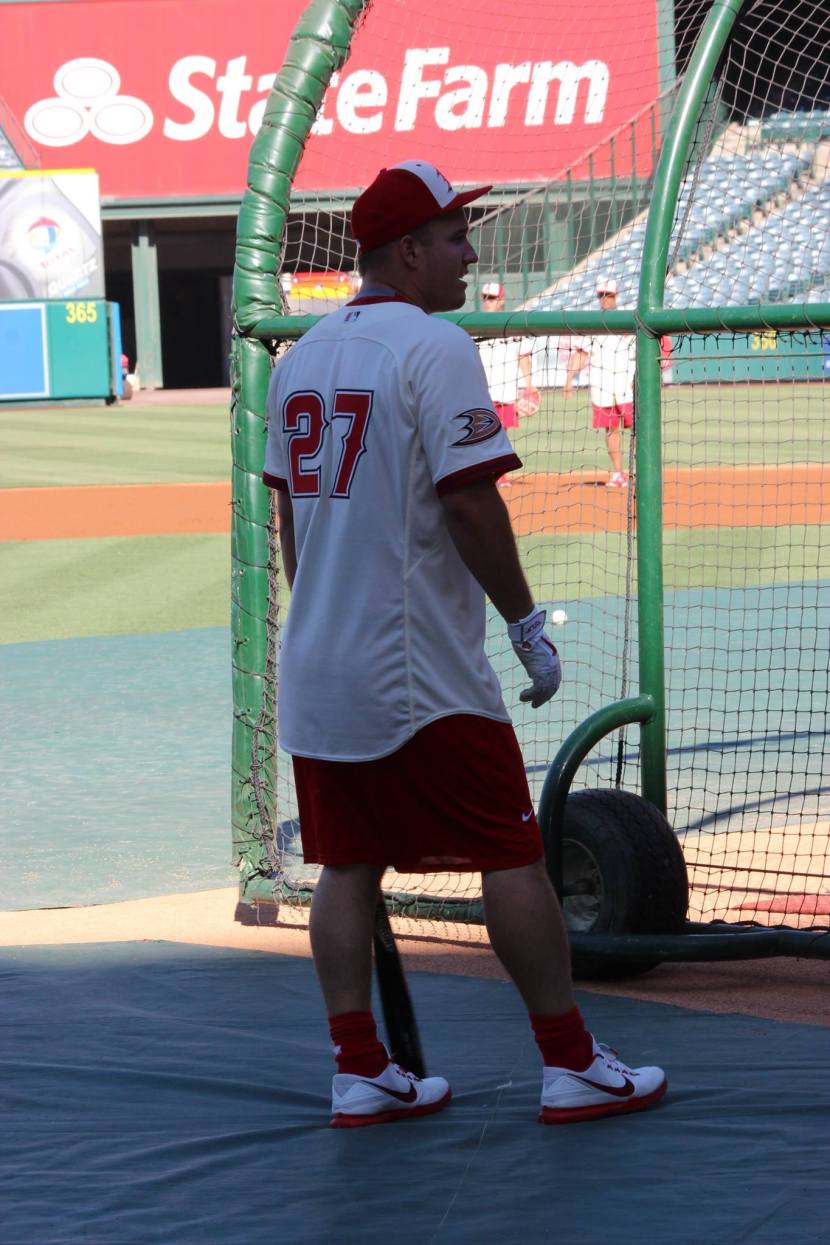 The Ducks night promotion at Angel Stadium was really popular. The BP jerseys were turned out really well. There were 2 different hats available. Fitted hats as they wore in BP were available in the team store and adjustable caps were available if you had purchased a ticket using the code Ducks. When the Angels hit a home run, they played Bro Hymn by Pennywise, the song that is played when the Ducks score a goal. The Angels won the game and it was a great night all around. 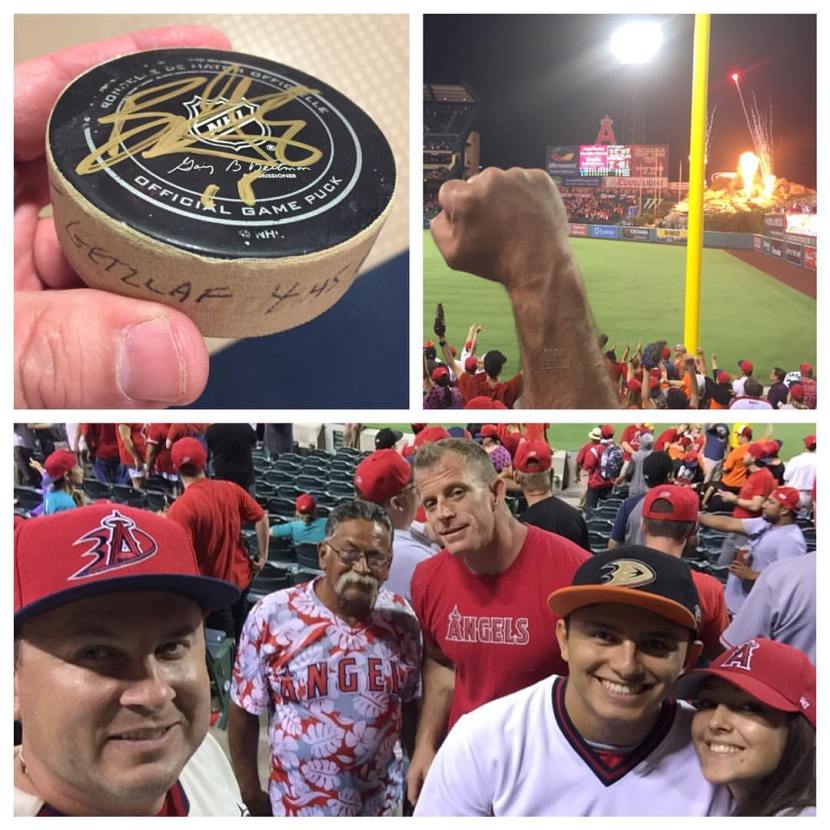 The Ducks again hosted an Angels night on January 25th, 2017. Again they offered mystery signed pucks for charity and the team store had an even larger amount of merchandise available. I was lucky enough to attend a meet and greet that night with Angels pitcher Garrett Richards. I also ran into newly acquired Angel, Danny Espinosa. The Angels posted a picture of Danny and I on their blog as well as the below picture of the meet and greet with Garrett (I’m pictured on the right side of the conference table, 3rd person back). 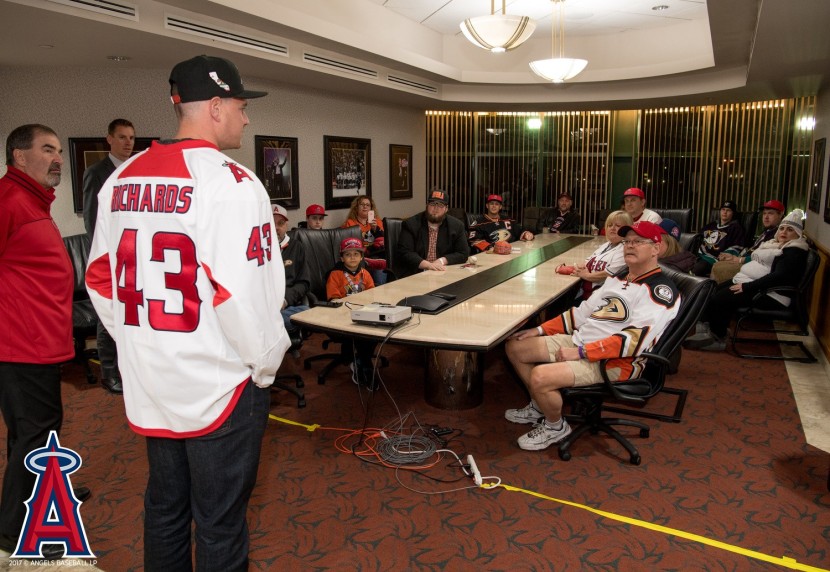 I asked Garrett if his procedure had been successful previously or if it was groundbreaking and he explained it in detail. So from the sounds of it, as I mentioned in the meet and greet, if everything works out well then this may be referred to as the “Garrett Richards Procedure” in the future, just as they do the “Tommy John Surgery”. 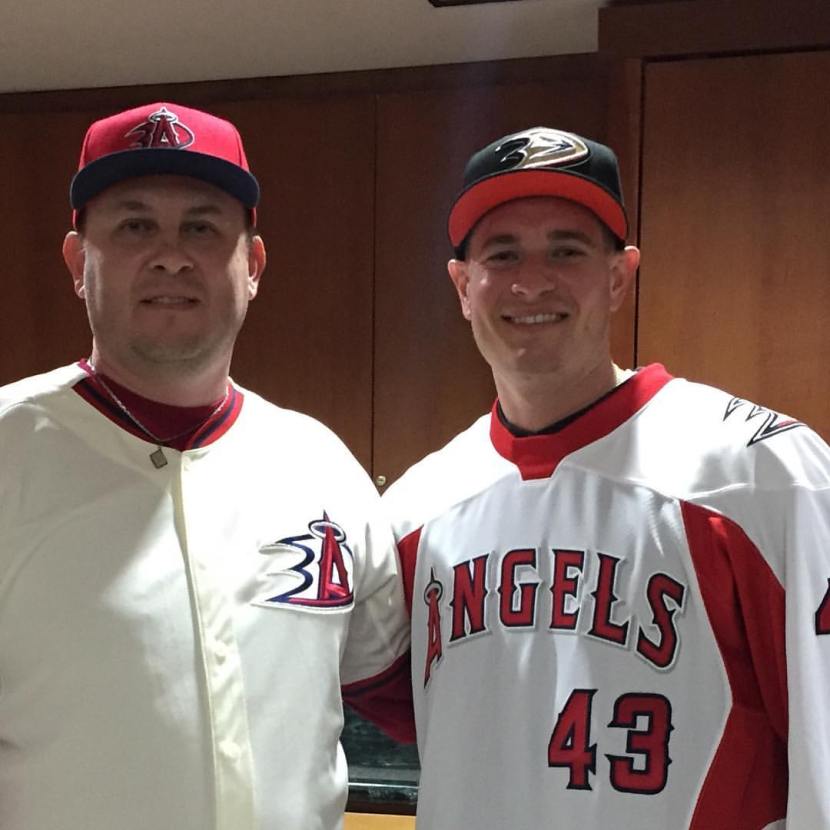 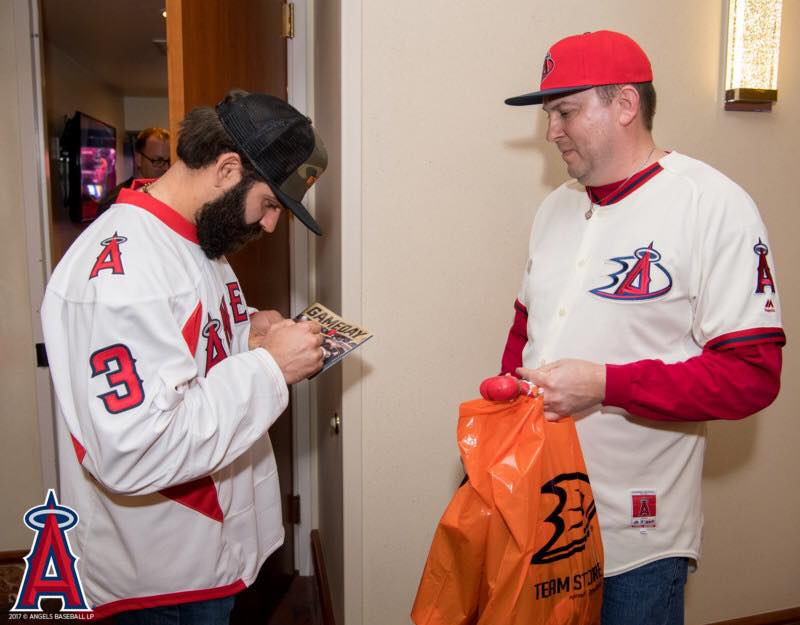 I was lucky enough to get Ryan Kesler as the mystery autograph. It’s picture below with the merchandise I picked up that night and the program they were giving out. I had my program signed by Danny Espinosa (as pictured above). 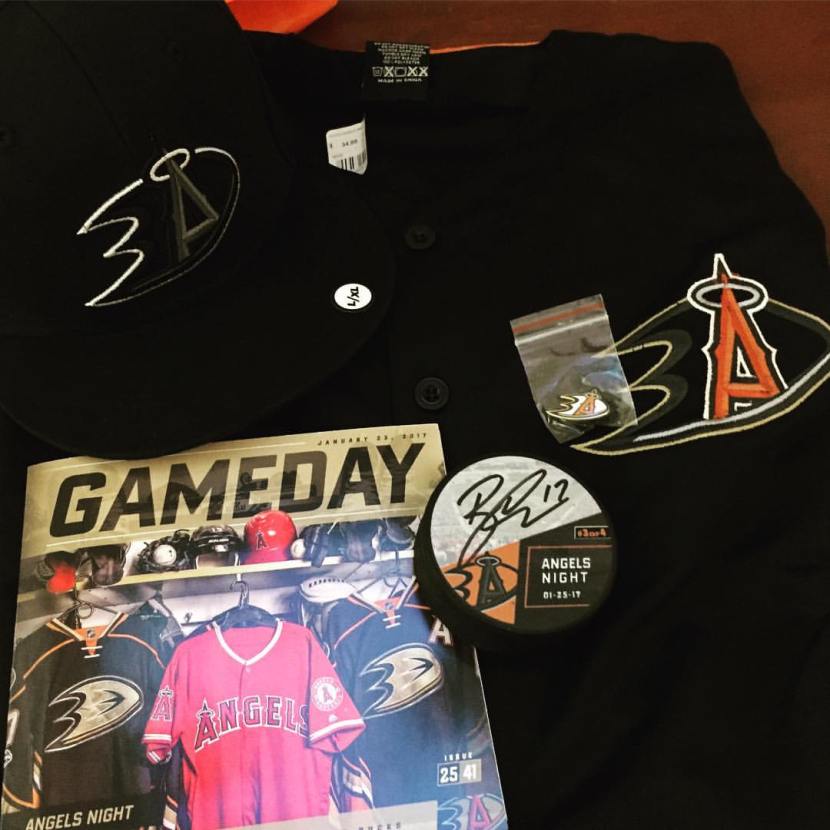 I ran into former Duck Teemu Selanne. Funny enough I happened to see him 3 times in a week time period (also at Watch Party and NHL All-Star Party). 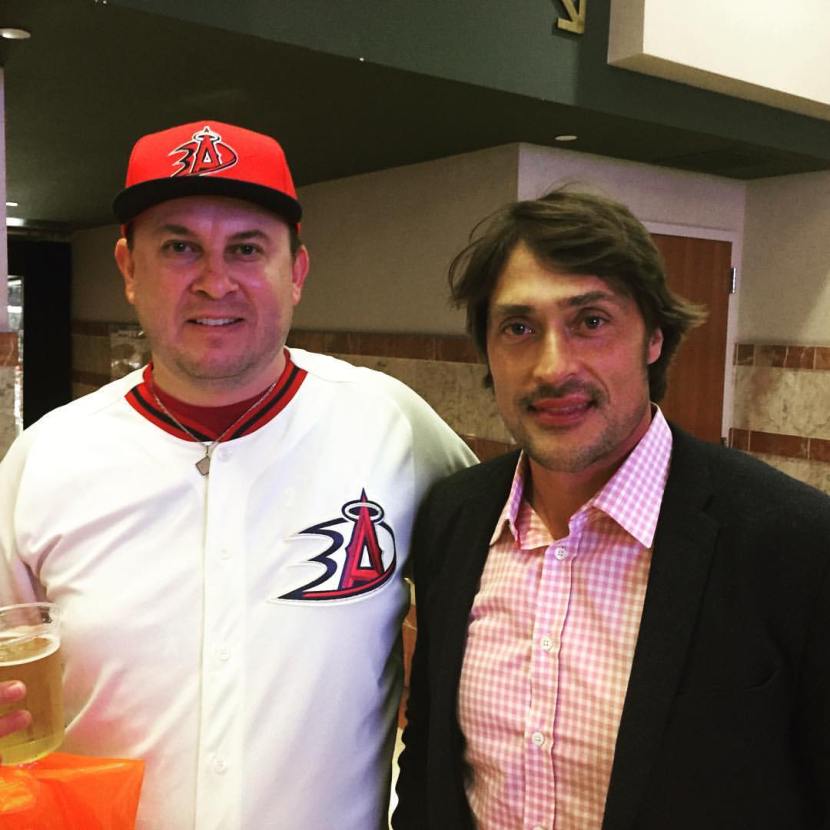 The Angels will be hosting Ducks Night again this season on Tuesday September 19, 2017. This time it appears they’re giving out a beanie to everyone in attendance.