Last night was the home opener at Angel Stadium. I was fortunate enough to take part in the on-field flag presentation during the National Anthem. I’ve done it about five times now and this was the first time that there was a flyover. I was at the bottom center of the flag and the planes flew right above us. It was very impressive. I lucked out and got a baseball from batting practice as well. 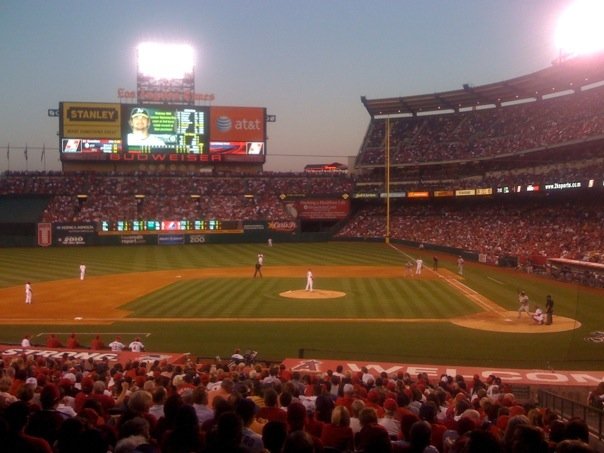 The game was great and Joe Saunders shut the team down. The relief corp did a great job as well keeping the A’s shutout. My friend mentioned what happened to that great hitting A’s team that we heard about. Unfortunately my answer was a bit prophetic. I told him wait until they face Moseley tomorrow. They had nine hits and three runs in six innings against him and the bullpen gave up the rest.

Tonight was Angels Hall of Fame blanket giveaway at the stadium. When I first arrived I noticed an Angel Legend standing by the Angels Wall of Fame. It was Jim Fregosi and I waited until he finished a cigarette to approach him and ask for an autograph. I had him sign my blanket and a baseball.

We had seats in the last row of the Upper View. They were probably the worst seats I’ve ever sat in at Angel Stadium. We were given the tickets for my son’s class. It’s quite a different perspective to in that area. The view of the game is not bad actually but I really don’t like being that high up in general. Unfortunately the Angels were comparable to the seats on this evening. The thing that really stood out from the game to me was Juan Rivera leaving five runners on base in his first two at-bats (bases loaded and runners at second and third). There was some drizzle tonight but luckily our bad seats were covered.